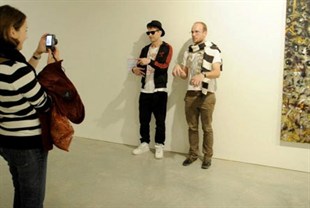 It was the perfect tribute. Almost.

When Sydney creative duo James Beswick and Dan White decided to honour the memory of late Beastie Boys member, Adam "MCA" Yauch, they could not think of a venue more perfect than the Museum of Contemporary Art (MCA).

"It was the perfect location to do a bit of sabotage", Mr White told ninemsn.

And the perfect tribute? A guerrilla-style art installation complete with a human statue and fake artist's statement.

"Their brand was about being a bit anarchist as well and that’s why everyone loved them," Mr White said.

Mr White and Mr Beswick hired Kim Staton, from Human Statue Bodyart, to strike a quintessential MCA pose beside the artworks that line the walls of the museum.

Mr Staton managed to hold the pose for 20 minutes without moving, even with people trying to make him laugh and posing for photos with him.

The creative duo was able to film him, and the various reactions, after managing to sneak a camera inside the museum.

"He was a really talented guy. He didn't break once," Mr White said.

Mr White said the saboteurs weren't thrown out of the museum — a security guard even seemed to enjoy their work.

"It kind of doesn't add to the anarchist element," he said.

The tribute was performed in aid of The Cancer Council, which Mr White and Mr Beswick are raising money for.

To donate to their cause, visit their fundraising page or take a look at their Facebook page.

NineMSN
Posted by Eva Rinaldi at 6:26 PM No comments: 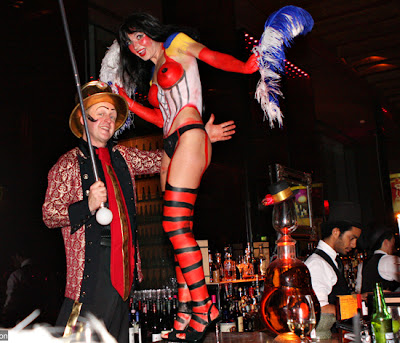 Sydney’s Zeta Bar at the world famous Hilton Hotel continued to push the extreme cabaret, now a staple of Friday nights in 'Sin City'.
If prohibition and tease are your thing, or vice if you prefer, you have come to the right place, or at least one of them, and you won't find a dirty old man, peeping tom or brown paper bag anywhere in sight from what we can muster.
My Human Statue Bodyart was thrilled to once again deliver a red hot and smoking cabaret presentation.
Cabaret lovers will be delighted to hear that the rumours continue to getting stronger that the 'Extreme Cabaret' theme will continue at Hilton Sydney much longer than the originally forecast 12 weeks. Word is that Hilton Hotels at the Gold Coast, New Zealand and even as far as the United Statues and Amsterdam are keen to incorporate extreme cabaret into their big entertainment nights.
Tonight it was Human Statue model Anastasiya Bakss made up in a bodypainting based black and red number that epitomised tease, burlesque and titillation.
The extreme cabaret performances have pumped blood into the Hilton's Zeta bar, and we know it's been wonderful for business. Downstairs at the Marble Bar has also appeared to have benefited by extra foot traffic and drinkies.
Zeta Bar biz king Grant Collins says of the nights "a late-1800s circus freak show crossed with 1920s-'30s sophistication".
Some of the most popular drinks at the moment include Absinthe (look for the sexy green bottle) and all things liquid nitrogen.
The fun and flirty Friday nights at Sydney Hilton have been one of the key watercooler conversation pieces in offices in and around Sydney's CBD for weeks.
Up to be tantalised in an appropriate cool and sexy fashion? Snatch the opportunity to do 'Sin City' Sydney like it should be done. You can bet that Sydney Hilton will be pumping again next Friday, and its got lots to do about 'extreme cabaret'. Join us and see what all the fuss is about boys and girls. Sweet dreams. 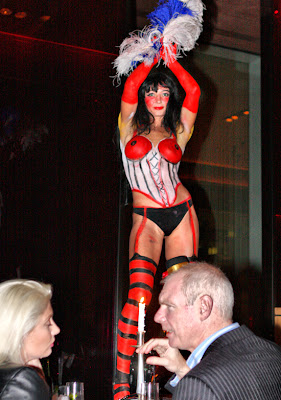 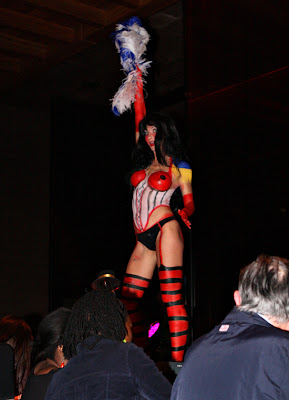 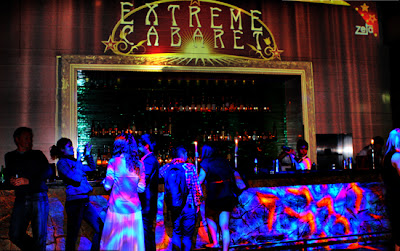 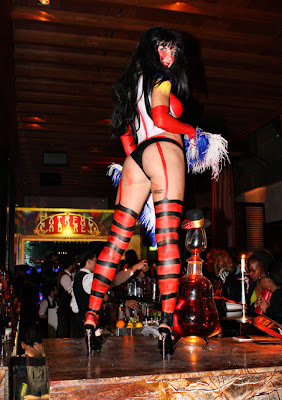 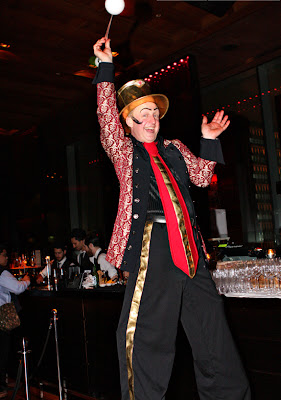 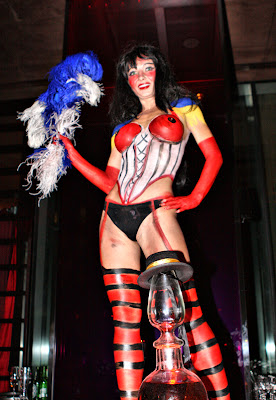 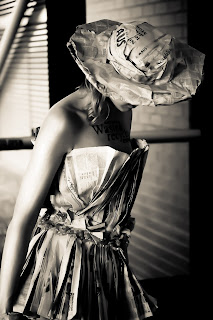 Eva Rinaldi creation
Today's Australian Waste & Recycling Expo at Sydney Olympic Park started innocently enough at Homebush in Sydney's west.
Accessibility was fantastic, located close by to some of Sydney's most impressive public transport infrastructure like trains and (eco friendly) buses.
Little did the event organises and exhibitors know it was a matter of the calm before the storm.
Over a hundred of Australia's best and brightest waste, recycling and eco based companies showcased their wares, all looking to gain a competitive advantage, stand out from the pack, and we suspect, generate a few headlines. Some succeeded more than others, but from what we saw, every exhibitor stand was a fine effort.
As is usually the case with any field, there's only so much room at the top, and sometimes the right marketing, salesperson, attitude, media or even pseudo publicity stunt or gimmick, can make all of the difference.
The switched on exhibition manager Sue Reid, was smart enough to see she "needed" to add an extra spark to the event, which incidentally its opening day fell on the same day as an afternoon shower. Ms Reid was not going to let anyone or anything "rain on her parade", weather being accommodating or not. The atmosphere was warm and inviting.
In the days prior Ms Reid had contracted arguably Australia's most famous and talented bodyart and human statue curator, Eva Rinaldi. If you think you recognise the name, your probably right.  Ms Rinaldi is the one who has embarked on a national and international campaign to bodypaint and do creative works on American talk show queen, Oprah Winfrey, and just quietly, its on track we hear.
Today there was no sign of any Oprah (or John Travolta) "knock off".  There was however a gorgeous creature which when she spoke made it seem as if she just flew into Australia from some exotic island.  Upon probing she identified herself as "Victoria", but the miss wasn't there for her mastery of the Oxford Directory, she was there to add visual excitement and wow factor to the expo, and wow factor she did achieve in spades.
An insider joked "Green Eyed Monster", but we're sure they were just kidding. Perhaps 'Gorgeous Green Machine' may have been more fitting.  In any event, she was a eye catcher, bodypaint or not, but Rinaldi must be given full credit for her incredible transformation that would have saw her fit into the film set of 'The Green Lantern' or 'The Incredible Hulk', and you get the idea. It was WOW!
Due to tight deadlines Victoria was bodypainted almost head to toe in an amazing 30mins, and finished off in wait for it...a dress made out of virtually nothing but a hand crafted edition of popular broadsheet, The Sydney Morning Herald, the flagship title of media powerhouse, Fairfax Media.  Victoria's handcrafted accessories included earrings, hat, gloves and travel bag. For the record most of the bodypaint was silver in colour and branded just enough for instant recognition with 'Australian Waste & Recycling Expo'.
Some marketing and media savvy onlookers were said to be overheard talking about just how marketing and media savvy both Ms Rinaldi and Ms Reid were. We think they were correct.
Various print newspapers have come up with different slogans over the years... The New York Times "All The News That's Fit To Print", and even the beloved Sydney Morning Herald "Start A Conversation", but we feel today's model dressed in virtually nothing by a recycled SMH broadsheet said it all. And true to the newspapers' slogan, she was certainly "starting a conversation". One can just imagine if a traditional paper boy was at the show screaming at the top of his lungs 'Read All About It'!
In a day and age when many a marketing gimmick and news headline looks pretty recycled, this event, the model... the whole package looked as fresh as a daisy.
And, for the record, Fairfax Media's newspaper publications are made from recycled paper; the powers that be wouldn't have it any other way, nor we suspect would Ms Reid and the powers that be at the expo.
Some of expo stands that caught our eye (and the eye of Victoria - the Human Statue model) included Scania (the big silver truck engine and beautifully decorated stand), CAT (with sports car sub brand WestTrac), NSW Government - Environmental Change and Water), Eriez (very friendly, great pens and lollies at the stand), National Recycling Week (linked to Planet Ark) and bano (solutions for recycling).
If you happened to miss the event, or just want to refresh your memory, please visit their official website
www.awre.com.au
And, if like many, you were impressed by the "recycled fashion model", take a look at more examples of Human Statue Bodyart on their official website www.humanstatuebodyart.com.au 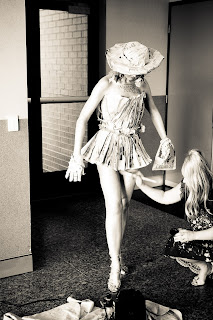 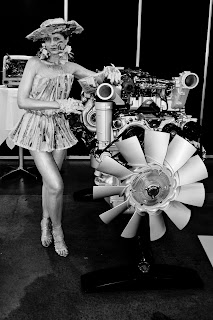 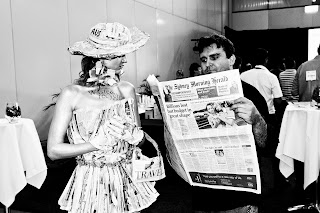 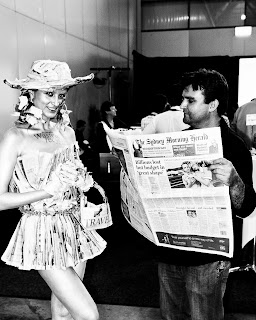 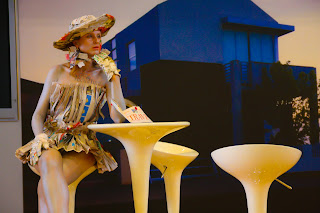 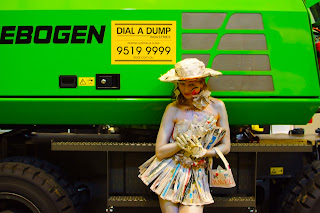 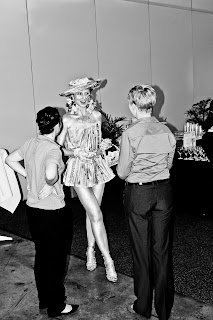 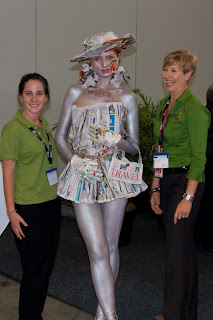 Posted by Eva Rinaldi at 5:19 AM No comments: 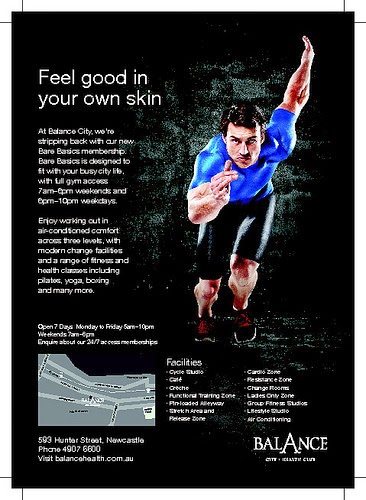 Eva Rinaldi
Sydney, NSW, Australia
Human Statue Bodyart is Australia's leading bodypainting, human statue and creative arts services companies. Established in 1997, they have created and worked on many of Australia's most dynamic and successful media and marketing campaigns.